I am really missing my camera ..... I have just made 5 Jumprope Dresses,and they would have been perfect to blog construction! Oh well,I am sure I will make more.

While my camera is on sabbatical,I have been using my mobile to take some short videos and posting them on Flickr.
I shot this one a few nights ago and my O+S OS friend Johanna kindly expressed a interest in how we came about to have them.
So Johanna,this ones for you!(I have ALWAYS wanted to say that)!


We have pets,we don't have a lot of up to the minute toys and games,but pets,once you have one,what's a few more?
Unfortunately,we have not had much luck with guinea pigs or rabbits. Jed strongly suspects the  mixy and caleasey(sp)? viruses that have been released to combat the feral rabbit problem.
We have had some dear little guinea pigs,a favourite was Aurora,who would sit up and beg prettily for a grape. Such a sweet creature was she,my mother offered to mind her when we went to the beach for a fortnight. Not only feeding her,but changing her paper AND giving her a daily brush and cuddle.
My siblings were convinced dementia had set in(my mother is quite elderly and does not like animals),but Aurora was so appealing,she softened the hardest heart.


A very dear friend has Flop Ear rabbits. They are the cutest things,white and soft and fluffy.
Two years back,she asked whether the twins could have one each for a pet. Jed said 'No' and was adamant! No mice-no rabbits!
Well, the twins worked on him and in due course a cage was made and said bunnies were in situ.

All went well for 6 months or so and then we went out one morning to a cold,stiff little Mopsy. The girls were very upset,but on a farm animals frequently die,so they dealt with it quite well.
In this time we had had several Guinea pigs who did terribly well-and then dropped dead!
The animal graveyard was filling up and Jed was kept busy making crosses. We did have some creative funerals,including one when we were a bit presumptuous burying the loved one and the chocolate box did a little jump in the air.
But I digress ....
Finally Flopsy succumbed,being held through his final moments by his loving(and brave)owner.
''Thats it'' said Jed ''No more rabbits''.
We were vermin-free for about a month,when the same rabbit owning friend rang me in desperation,could I take two tiny bunnies,she had no room,they would be donged on the head.
You know,the usual emotional black mail spiel!
I told her if she could convince Jed,we could take them.
''Do they look like Flopsy and Mopsy''?I inquired. She replied that they were terribly cute and that she must dash to catch Jed on his mobile.
Husband came home that night with a box with several layers of tape wrapped around it. When I quizzed him about it,he replied that she was very worried they would get loose.
You can imagine,dear readers,his reaction when upon opening the box,to find not two little balls of white fluff but two straggly,very young feral rabbits!
I will not pollute your delicate ears with his comments verbatim,but he was straight on the phone to my friend who strangely was not available all evening.
Off course,it was love at first sight and Gracey and Elly are here to stay!
That was 12 months ago,Jed refuses to purchase rabbit food,they live on house hold scraps and appear to be disgustingly healthy.
And they are the friendliest rabbits we have owned!
(just don't mention that to Jed)

I Have Been Bad!

Looking through my box room ta-dah!
I found that I had many prints and patterned materials but I was running low on the basics. White linen,white shirting,stretch poplin,denim and that sort of thing.
I shop online as it is so much easier,if I am not sure ,I will request a sample.
Because I wanted big quantities I tried googling but wasn't really getting any where.
Son came to see what I was doing and he suggested Ebay. I wasn't convinced but thought I would give it a go.


Oh wow,with a little searching and a few emails did I find some bargains!


How about some white linen? I emailed her for extra and got an amazing deal,she was a sweetheart!


Or maybe you need new yoga pants? black cotton/lycra at an amazingly cheap price I only ordered a metre to check it out first.


My children love shirts made from stretch poplin as it has a little more give,I purchased the 10m roll,but there were 3m rolls as well in lots of colours.


Check out my denim bargain, I am still speechless!


I found many other 'one off' treasures,I searched bulk fabric and picked up swimsuit fabric for next to nothing and 10m of yellow knit(methinks Bedtime Story Pajamas trimmed with CW)for under $10.
Its definitely worth a look!

I don't have a wall,but I do have a door!

Do be do,how excited am I? 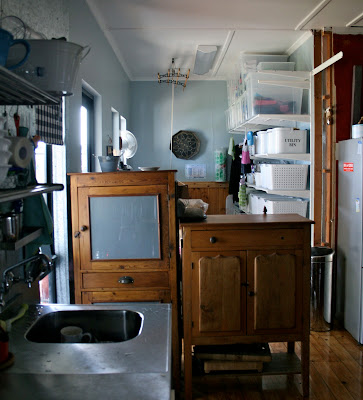 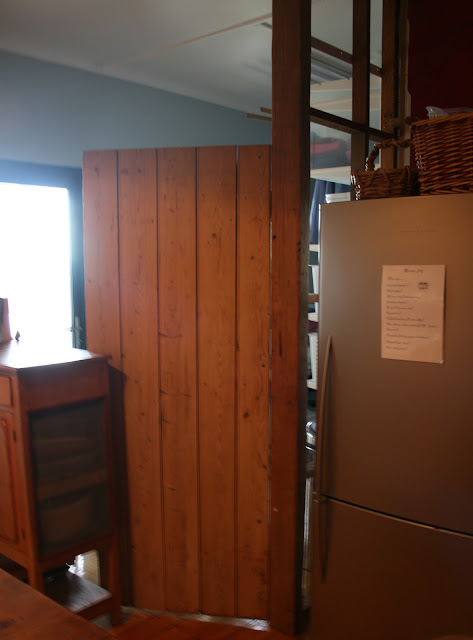 Many more exciting things have happened today!
Another chunky pole has gone in(just waiting for me to steel wool and oil,goodbye fingernails)and a track for the sliding doors,laundry side ...... but I can't show you those

Because I still don't have a camera!

Firstly let me clear up a translation issue,that means broken!


Good,now moving on.......
Everyone swears they didn't touch,drop,look,sneeze at it!
Nobody saw anyone else touch,drop,look ......... you get the idea.
But,
The flash stopped working
No big deal thought I,new bulb!
Oh no,nothing is that easy!
'Whats wrong with it? I asked the repair man
He looked at me,cleared his throat,and gave me his diagnosis
'Its buggered'


Oh I see,very helpful!
So I have paid this legend in his own lunch box $35 to show it to his mate,
To see EXACTLY what is buggered

Back to the Beach part 2 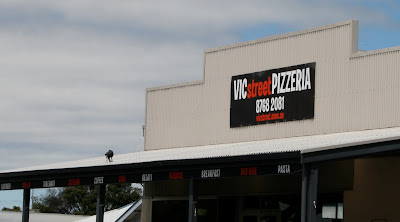 We headed back into Robe for brunch at her favourite place to eat.
The Vic Street Cafe!

After a very good lunch,we headed to the beach to walk off all that pizza. 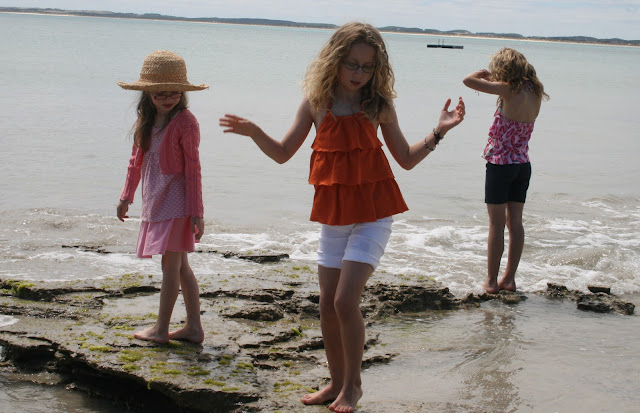 We always head in early,so we had the beach to ourselves!
The tide was coming in,but Son&Heir was determined to try some fishing! 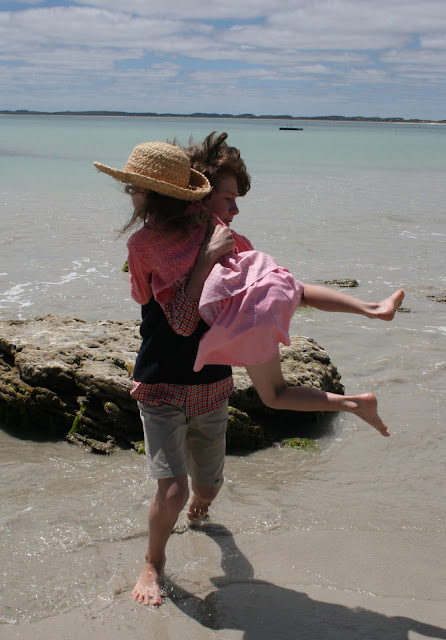 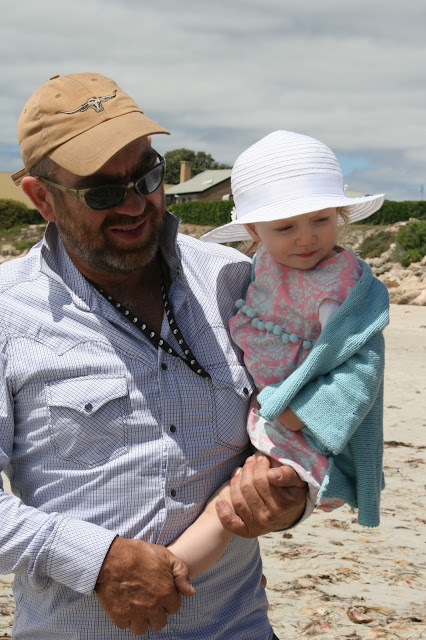 Or safe in her Daddy's arms!
The art gallery was open,but I wasn't feeling brave enough ........ five children in a ceramics display?
Look through the windows!
This was Son&Heirs idea of art! 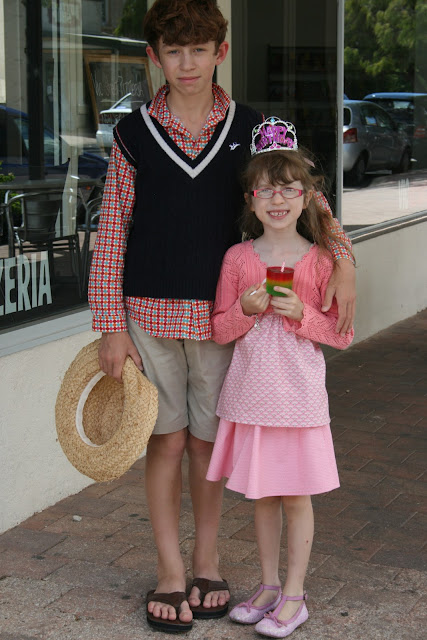 When we got back to the cafe it was very busy and the baby had had enough.
So Son took Miss L in to choose a treat,a Traffic Light jelly,which the lovely staff popped a candle in! 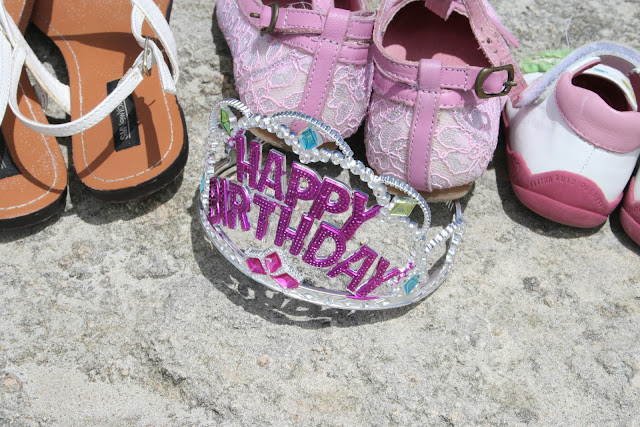 We had a wonderful time ....... ''The best birthday ever'' declared Miss L!
All the patterns for the children's clothes are available from oliver+s just click the name!
Thanks for reading
xN
Posted by motherof5 at 5:03 PM 8 comments:

Back to the Beach

Lots of reasons to head back. The swimming carnival was held at a town in that direction,the weather is still warm,the farm is quiet(ish) and it was Miss L's 7th birthday......... and this is her favorite place in the whole,wide world! 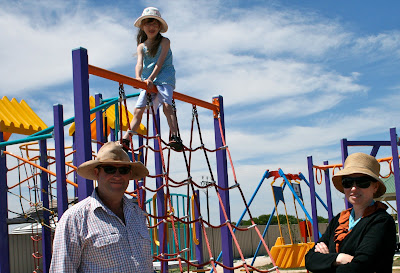 On the Saturday we headed into Robe to meet up with one of my brothers. He is heading up to the Northern Territory to manage a large(huge) cattle station. 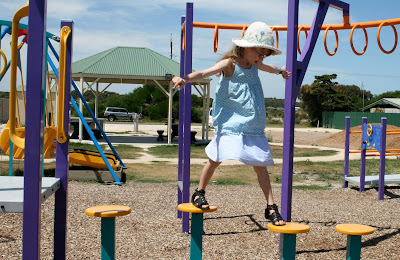 He took us to a brand new playground WE had not found yet! It was fabulous! As well as great play equipment,it had a special swing for disabled children. I have never seen anything like it,what a wonderful idea! 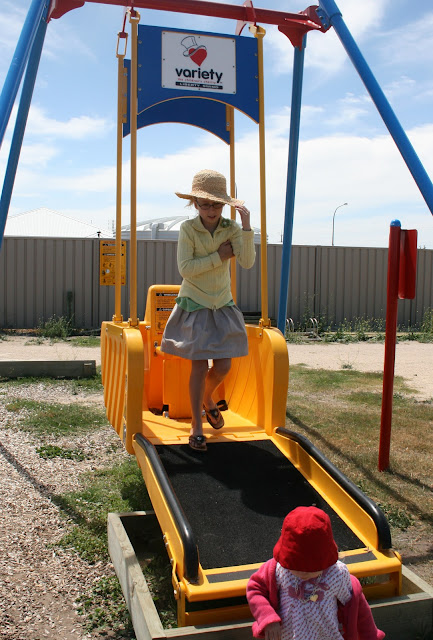 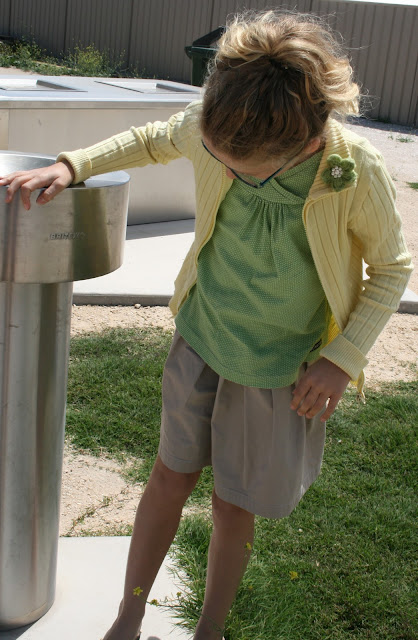 The water fountain was very handy to fill up our drink bottles! Can you believe they charge for a glass of tap water in cafes now!
Miss M has the slippery dips down pat now! 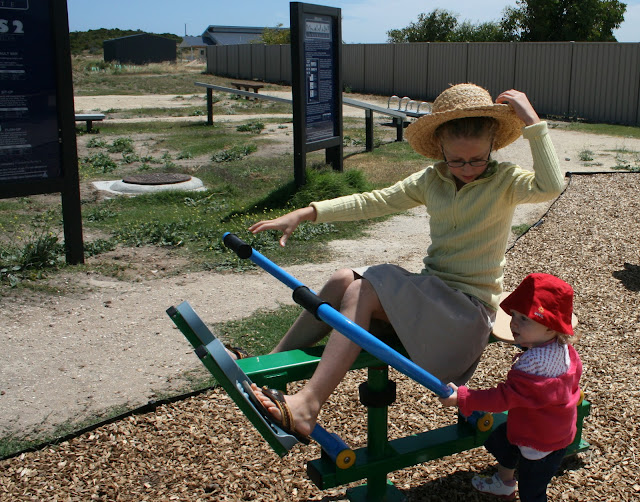 As well as excellent play equipment,the playground incorporated  gym equipment with a workout program displayed on large signs.
Fantastic,go for a walk,stop at the playground and have a workout while the children play!
Proud Parent's?........... Absolutely!
to be continued....
Posted by motherof5 at 11:57 PM 7 comments:

Email ThisBlogThis!Share to TwitterShare to FacebookShare to Pinterest
Labels: i

Swimmers and all things glitzy!

Oliver+s Nature Walk pants,I am sure it never anticipated being made into these.

It's a little like taking Granny's wedding dress and making something out of it for your flamboyant cousin to wear to the Sydney Mardi Gras!(No,I don't have a flamboyant cousin,but wouldn't it be fabulous if I did)?

It's swimming carnival on Friday and Misses E-Z needed new swimmers. I had made some a few months back for Miss Z but she left them wrapped up in a pink towel and there was a colour run issue.... 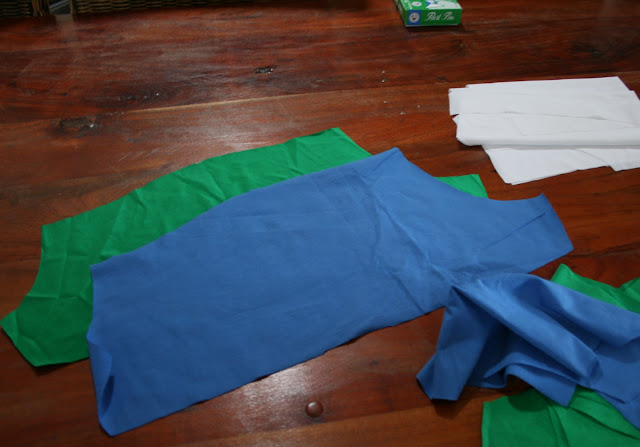 The swim pants were a little flimsy and I noticed that Miss Z wore knickers under them so I decided to line them with cotton/lycra knit. This was a complete experiment,I generally don't 'do' knits. 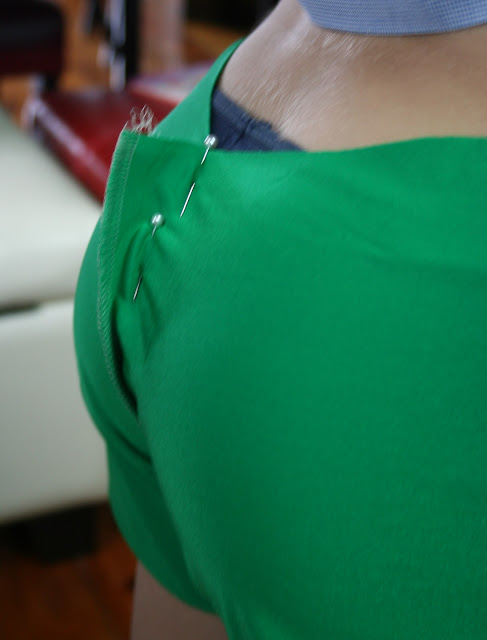 I cut out the 8 for my 11 year old twins and then fitted them. As these are swim pants they need to be tight! 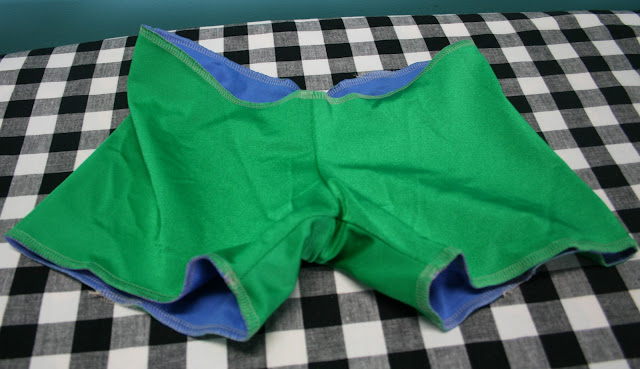 I made two pairs of the cut off pants,put them wrong sides together and overlocked the top and legs.
I then followed the pattern,treating the lined pants as one piece. It was very easy! 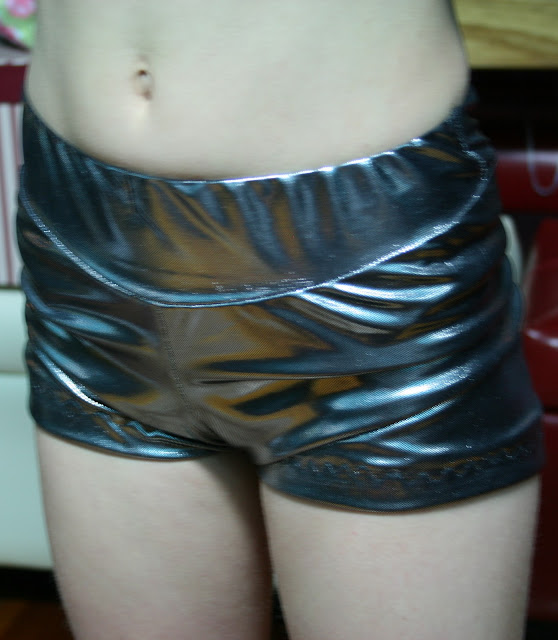 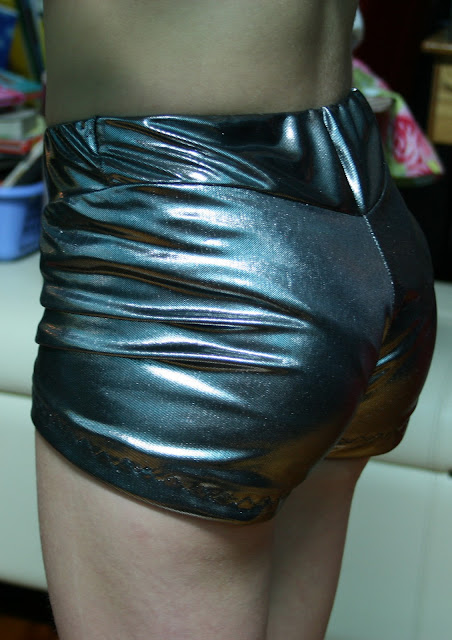 Miss E was very pleased but...."Perhaps they need a little something''? 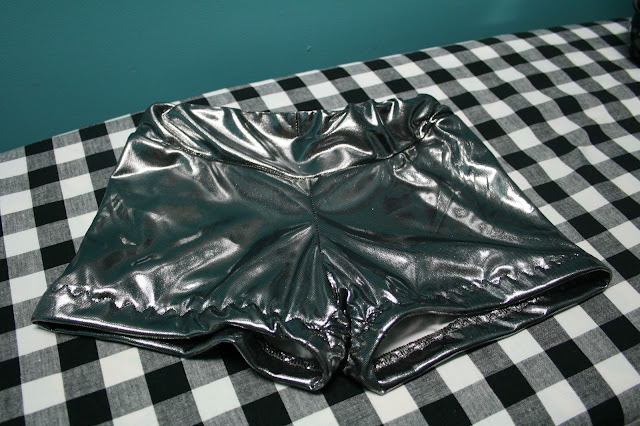 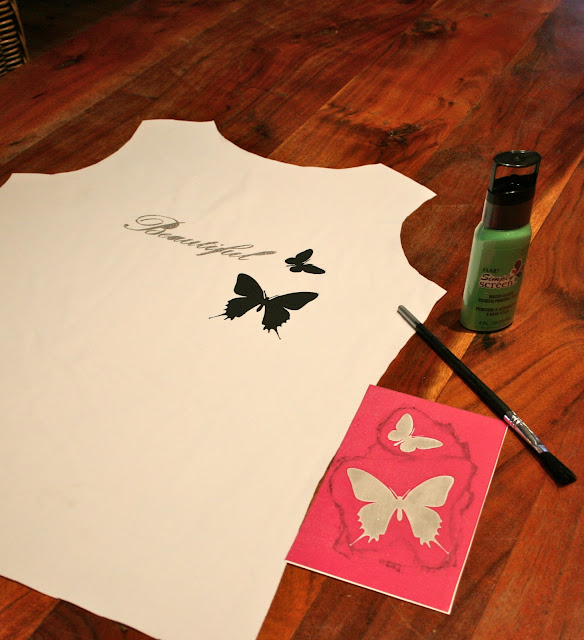 The stencils are so simple to use! 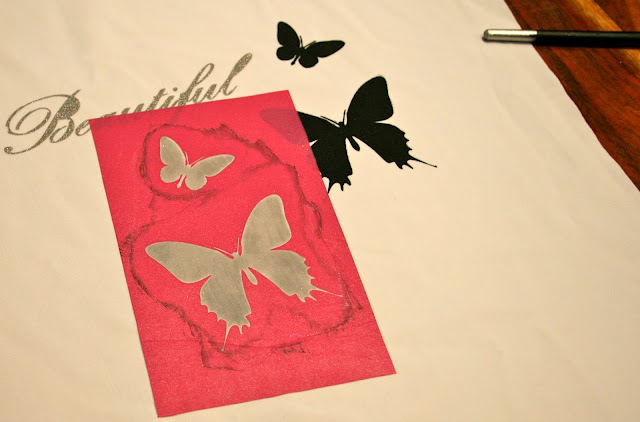 They are adhesive on one side. 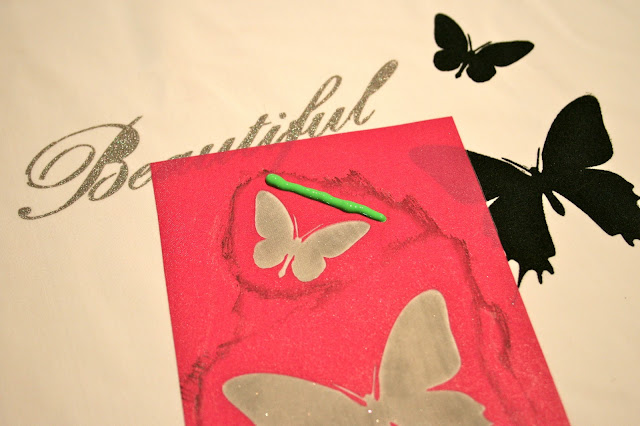 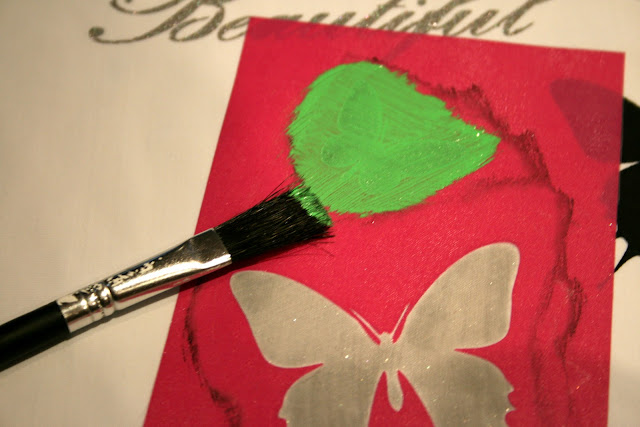 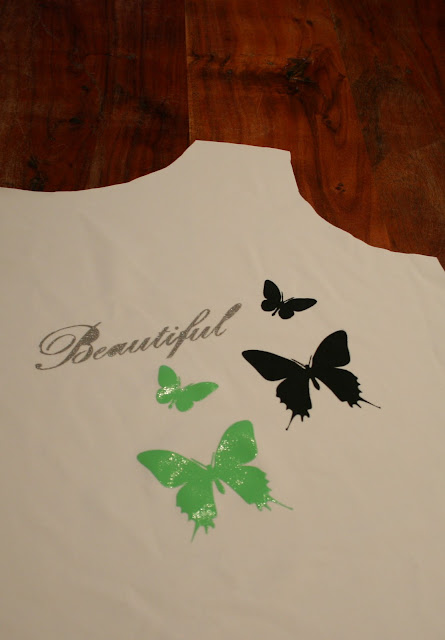 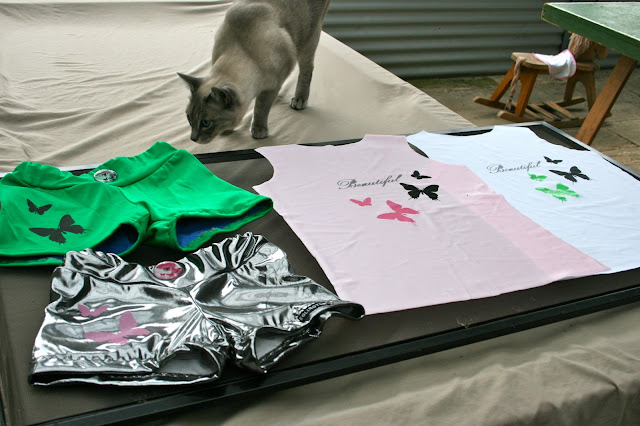